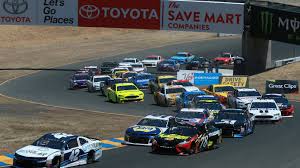 This Week in Motorsports - June 16

It helped to be sitting in the brand-new VIP lounge area sipping a glass of expensive champagne and eating oysters. Ah, the life of the rich and famous. To the track’s credit, Marcus Smith, Jill Gregory, and the folks who did the work, the VIP treatment over the weekend for so many key people was most impressive. The new building was exceptional. The crowd was bigger than last year and the weather was fine albeit windy. Sonoma is becoming a different venue.

There was a time not that long ago when Sonoma and Laguna were just older versions of Thunderhill. We actually had the cleanest facility and the nicest Club house, but no more. Sonoma and the owners, the Smith family, are investing new money into the property to embrace a specific market segment including corporate America and the world, high-end car manufacturers and their owners plus marque events attended by the upper class. It is a good market. It is less impacted by the basic economy and able to pay far more money to get on track than the majority of track users.

At Thunderhill we have four major car programs that I expect to keep, but the market is changing. Thunderhill was built to accommodate the basic motorsports fan, the amateur racer, and the recreational user whose biggest asset might be their car or motorcycle. That target remains in place, even if a lot poorer for many reasons. It will likely increase for us based on Sonoma focusing on a more exclusive customer base. Time will tell. Meanwhile Laguna Seca seems to be at a crossroads. They have the location for the highest economic model but the needs of the venues, now overseen by elected officials and the staff at the County of Monterey, may not allow the level of funding needed to do what Sonoma is doing. They seem to be focused on professional race events as their key market segment versus rentals that we do. Again, we will see as we enter a period of familiar economic stress for all of us that once had savings accounts earning 12%.

With the changes at Sonoma I have received a bevy of calls from garage tenants there hoping to relocate to Thunderhill. This is a classic example of where the government and the developer (us) can add to the coffers of the County by making these garages happen overnight and not after a year plus of waddling through the process. The property tax alone that would come from a successful team effort is worth making things happen. And there would be more as there always is. If we cannot respond to the garage tenants at Sonoma who have to move at the end of the year, they will find other homes and spend their money in other local economies and so it goes. We will just have to see.

Back to the race. The big CUP news is Daniel Suarez won. It was the third win for first-year CUP team, Track House Racing, which in itself is as mall miracle, and it was the first win for Suarez. To be clear, he won the race. He did not inherit the win due to some act of nature or other strange event. He won by beating Chris Buescher, Michael McDowell, Joey Logano and Kevin Harvick. It helped that one fateful set of pit stops took out Kyle Larsen, Chase Elliott and Kyle Busch and a few others that may have changed the outcome.  Suarez was the fifth foreign born driver to win in a major NASCAR series among them Juan Pablo Montoya, Marcos Ambrose, Mario Andretti, and Earl Ross who came from Canada. The win puts him in the playoffs and reduces the number of unclaimed openings in that playoff grid to four.

One day earlier Kyle Busch drove to the win in the Camping World Truck series beating series point leader Zane Smith, Ty Majeski, Ross Chastain, and Chandler Smith. It was Busch’s 62nd truck win and second in arow for the Kyle Busch Motorsports truck team as Cory Heim won last week atGeway. The trucks had their share of crashes, but the speeds at the shortversion of the Sonoma Raceway are so slow that the crashes just do not amountto much. There was an ARCA race on Saturday too that was won by Colby Howardover Dale Quarterly and Jack Wood. If you do not know any of these names do notfret. Neither do I. You can see them at Roseville Speedway where Bill McAnallyruns the show for what are mostly buy-a-ride-kids hoping to get into the realNASCAR. It works but you have to perform to move on unless you are special likeHalie Deegan. She moved on and is in her second year as a NASCAR truck racer, sotoo is Derek Kraus, another McAnally graduate. Buy-a-ride is common-place thesedays in the upper echelons of motorsports.

The Indy race at Road America went to Josef Newgarden that somehow earned him a million dollars. I was rooting for Alexander Rossi who was the fastest qualifier and led much of the race, but fell victim to worn out tires requiring a pit stop where Newgarden beat him out to take the lead in the final laps. Rossi also ended up giving the runner-up spot to Marcus Ericsson this year’s Indy 500 winner. Rossi held on for third ahead of Romain Grosjean and Colton Herta. The million-dollar bonus was awarded because Newgarden won three races on three different types of tracks this year including the Long Beach street course, the oval at Texas and then this purpose-built road course in Wisconsin. The money was split between Newgarden/Penske and Newgarden’s favorite charities that included Wags and Walks in Nashville and the Serious Fun, Children’s Network.  The Indy cars resume racing in July with four weeks in a row starting on July 3rdat Mid-Ohio. The series ends here on September 11that Laguna Seca aceway.

NASCAR CUP drivers are off this weekend resuming the week after in Nashville.  The Xfinity cars race on Saturday with the Trucks on course on Friday, all at Nashville. This weekend the trucks run at the beautiful Knoxville Raceway, the same track that hosts the Knoxville nationals for winged sprint cars. This is the second time for this dirt track event that replaced Eldora Speedway as the local dirt track for the series. Last year it was a silly wreck fest and there is little expectation for anything different this year. Check it out on FOX Sports.

Locally Silver Dollar Speedway had a special NARC winged sprint car race last night, Friday. I hope you knew and got to go? The next race there is not until the 4thof July when aerial fireworks will be the highlight of the holiday evening. You have to see the COSTCO parking lotto appreciate how great the fireworks show really is. There is one race in August and then the Gold Cup made up of a preliminary race on Wednesday and then three days of World of Outlaw winged sprint car races on the quarter mile oval track in the fair grounds off 99E.