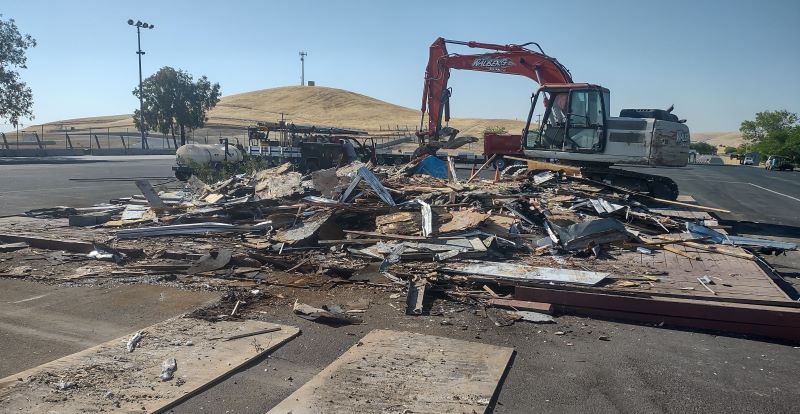 The 1100 square foot store is located right across from the Thunderhill Grill with easy access for those under the canopy enjoying good Thunderhill food service. As before, Nancy Menezes will be inside the pristine, new store ready to greet you and make your visit a happy one. In addition to clothing and race gear, she will have an expanded range of  pre-packaged snacks, ice cream and lots of cold drinks.

The new store is the latest in a long list of improvements made in the park over the last twenty-nine-years. Shortly following the opening of the new store there will be a big shade canopy added to the area where the old store once stood.

The former store was the oldest building on the property having started life as an overflow classroom in the Tracy area. When it got to the track in the nineties it was used as the business office. When the Roger Eandi Club house was built the team switched to the second floor there. The old office became the new [?] retail store which it remained until late August when it was unceremoniously bulldozed down. To be fair the old store leaked pretty badly and there was some concern that it might fall down. The unit originally came in three pieces which we bolted together and  the rain continually dripped in. For a time, we registered testers at the side window which was why we had an awning over one side.

When Nancy joined the team as the store manager, she put her heart and decorating skill into the effort and the store enjoyed a boom in sales and friendly outcomes. In 2021 the old store with Nancy at the helm, did over $150,000 in retail sales. Many of these sales spread the name of Thunderhill Park across the land and overseas in some cases. With the beautiful new store coming online Nancy and the rest of the Thunderhill Park team are hopeful that sales will increase and more nice things will be said about the ongoing improvements in the park that are all part of what David calls, “a work in progress.”