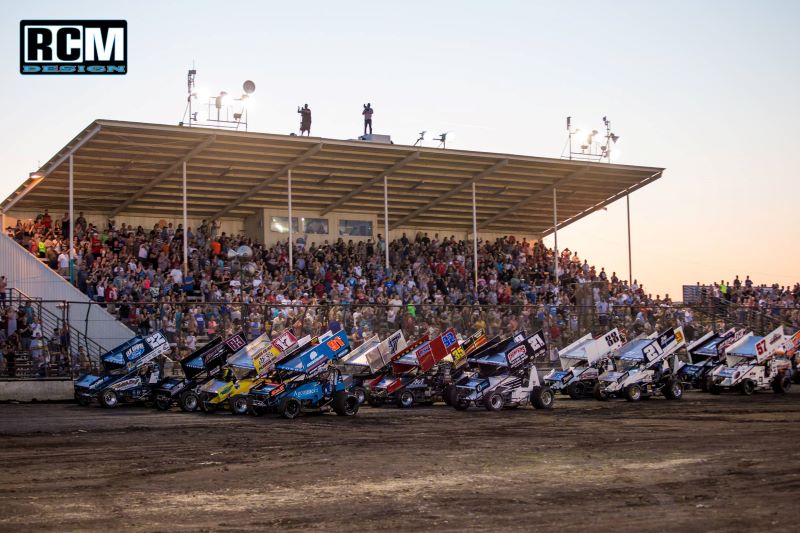 Unlike most of my reports on NASCAR races based on television, this report on the race weekend at Talladega in Alabama comes first-hand. I was there with Rick Thomas, Ray Ainger, and Dalas Gunderson. We had a blast being four crazy guys in a deep south gathering. We talked funny.

The weekend started with the Truck series that ran in the AM on Saturday. The long, 2.66-mile oblong course saw lap after lap of two rows of side-by-side trucks circle the track inches apart occasionally swapping lanes and positions. Despite expectations nothing bad happened in the way of a “Big Wreck”. That is until the last lap when the latest cluster of cars maneuvered for position and ended up spinning across the finish line in a tire-smoky mess. When the smoke cleared sentimental favorite and perennial hard luck case Matt DiBenedetto was declared the winner by inches. This was Matt’s first win in all of NASCAR and it made a lot of fans happy. He was followed across the line by last year’s champ, Ben Rhodes, Tanner Holmes, Ryan Preece and Chris Eckes.

The one incident in the race that turned out to be Talladega-like occurred when the truck of Jordan Anderson caught fire. While it was still moving, he attempted to extricate himself from the smoke-filled, blazing inferno. This act produced gasps from the audience when fast moving trucks nearly missed Anderson as his truck headed toward the inside crash wall. When his truck hit the wall, he was still hanging out the window causing more gasps as it appeared, he might be crushed between his truck and the wall. This did not happen. The young driver escaped with burns that required a helicopter ride to the nearest hospital. He will be ok.

Later the same day another popular win was scored by A. J. Almendinger in the Xfinity race. It was Almendinger’s fourth win of the season and first on a “Super Speedway.” He was elated and announced the next day that he would race the full 2023 season in the Cup Series for Kaulig Racing.  Almendinger was third approaching the checkered flag when a push from his teammate, Landon Cassill gave him the momentum to pass Sam Mayer and Ryan Sieg. Mayer finished second by inches in what would have been his first win in the series. Cassill got third with underdog playoff contender Sieg next followed by Josh Berry, Parker Klingerman, Ty Gibbs, Daniel Hemric, Brandon Jones, and Noah Gragson. Despite my desire to see one of those Talladega big crashes, none occurred. Perhaps the next day I pondered?

The next day bloomed clear and sunny with the smell of campfire in the air combined with sizzling bacon and other sensory odors. The track showers were easy to get to and the company in the campground was good. Coffee is made for such occasions as is a slight nip in the Alabama air. We had runout of food the night before so our neighbors from Canada cooked us a few hamburgers and hot dogs to get us by. We were in a Cruise America class “C” recreational vehicle and they were in a rolling hotel. Another neighbor brought us candy and some sweet drinks defined as moon shine. It truly tasted like apple pie.

A quick trip to the on-site museum educated us on the history of the old place with cars from the past and lots of photos and displays. We befriended a fellow from Florida with a golf cart that fit four and paid him $5 each for rides there and back. We spent the AM in the new pit area enjoying discounted food in a giant building called Big Bill’s. It was named in honor of Bill France to fame was that they were part of the “Alabama gang” that raced in years gone by. Both are equally known for the last lap crash and fight that aired on CBS-TV live as part of the first telecast of the Daytona500. They were selling stuff they signed presumably for the money.

As 1pm approached the excitement of the race built. We saw some of the drivers up close at the country western concert and before that at a Rodeo in the infield. Now we saw them as they stood in the back of Chevy trucks that carried them before the crowd for all to see.

The race promised lots of action and clearly there would beat least one famous big crash involving at least half of the cars on the track. We sat near the top of the center grandstand as the field of 37 cars zoomed past in a collective roar heading for the green flag. Everyone stood. As it turned out there was no big crash. A couple of cars including rookie Harrison Burton got together in turn one. Ricky Stenhouse was credited with spinning Burton who collected Justin Allgaier, Joey Logano, Ty Gibbs, and Austin Cindric. Gibbs and Allgaier were the only two drivers unable to continue.

From there it was side by side parading to the checkered flag where the golden boy of NASCAR, Chase Elliott, scored the win. An advantageous push from Eric Jones in the Richard Petty listed Chevrolet sent him past long-time leader Ryan Blaney who was looking for his first win of the season. Following Blaney in second was Michael McDowell, Ross Chastain, and Denny Hamlin. The win was Elliott’s fifth of the year and locked him into the next round of eight in the playoff cycle. Jones slipped to sixth followed by Todd Gilliland, Daniel Suarez, Cindric and Chase Briscoe. Kyle Larsen finished eighteenth after showing great reserve when racing Elliott. It looked to me like team orders that I hope are not in place when the season final takes place in Phoenix, Arizona. NASCAR is on the ROVAL in Charlotte this weekend.

As the dust settled after the race, the fans poured out onto the local highways. The four of us made our way back to the RV for a night of contemplation. I cannot remember what we had for dinner. Perhaps nothing? Monday was RV driving to UBER riding to American Airlines flying to driving home. It was fun. I missed the big one. Not sure if another trip is warranted just to see, the “BIG ONE?”

Sergio Perez led every lap in the rain delayed Formula One ace in Singapore. Charles Leclerc finished second with fellow Ferrari driver Carlos Sainz completing the podium. Perez’s teammate, Max Verstappen, could have locked up the F1 title at the event with five races to go. Instead, he finished seventh and did not. It was a strange, rare day for the series point leader and his Red Bull, Honda powered car that has reportedly exceeded the cost cap of $145million dollars a year. This was the limit set at the start of the year in hopes of keeping costs down. There may be some kind of action for this, but what I do not know, yet. Stay tuned.

In local racing, Shane Golobic led all but one lap in the Fall Nationals last Saturday and, in doing so, captured the Chico Silver Dollar Speedway winged sprint car track championship. Golobic beat Mitchel Faccinto, Kalbi Henry, and Tanner Holmes to the finish line at the quarter-mile dirt oval. This was the last race of2022 at the local fairground speedway. Sixty-six cars were on site. Action during the forty-lap affair saw D. J. Netto and Tony Gomes come together sending Netto flipping. An angry Netto jumped from his smashed machine and engaged Gomes in a heated discussion. When leaving Gomes’s car, Netto wisely yanked the spark plug wires off the Gomes engine. This seems like the perfect thing to do when someone crashes you and will continue and you will not. Neither driver did. A fight ensued in the pits as a result. Good stuff.

You can always get your racing fix at Thunderhill Park in the remaining months or go to Cycle Land in Oroville or Red Bluff, both on Saturday nights with Outlaw Karts in action on dirt.