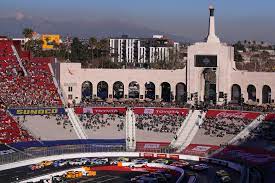 The big NASCAR race in the L.A. Coliseum is over and, on most fronts, it was a huge success. The weather was great. The crowd clearly looked young and new and there were a lot of people there. The television was good, the format was right for the event and the look of the track was most impressive. Dropping down a notch, the racing was better than expected. All but two races were won by a driver starting in the front row. Joey Logano started fifth and won the 150-lap main event over pole starter Kyle Busch.

Finally, there is the question of profitability. If the average gate fee was $100 and there were 50,000 paid in attendance that comes out to $5,000,000. The track cost $1.1 million to make happen. The purse was $1.9million and the expenses to execute the event had to be close to $2.5m counting payroll, shipping, hotel nights, advertising, celebrity appearances, and rental for the Coliseum. This hypothetical example [guess] would show a loss for the event but then there is the FOX TV money.  The event should have shown a profit.

Based on what I saw, the non-stop promotion of the event through FOX and what turned out to be exceptional TV ratings, NASCAR and Bill France’s grandson, Ben Kennedy have to be happy. The non-monetary values that should accrue to NASCAR will be huge. New faces, new places in an industry that is infamous for being regressive or at least, adverse to change, is a major accomplishment. Like the CBS broadcast of the live Daytona 500 where Cale Yarborough and Donnie Allison crashed out of the lead on the last half of a lap and then proceeded to engage in a knock-down fight, changed NASCAR.  The embracing of new ideas, new markets, and new ways to race stock cars in America will do the same for the betterment ofall.

Where racing is run by x-drivers and x-car owners and x-sponsors the impetus for change is caustic. This seems to have changed in NASCAR and we can only hope that it does the same in Indy Car, at local tracks and within all other traveling series. Change is good. Not changing is why there are no fans in the stands at local and national raceways. “Been there, done that,” for fans may be one cause and then there is the predictability that comes with status quo. I hope those of you who watched the final or any part of the historic NASCAR race in the L. A. Coliseum enjoyed what you saw.

The rest of the finishing order for the exhibition race known as the BUSCH Clash after Logano and Kyle Busch was Austin Dillon, Eric Jones, Kyle Larsen, William Byron, Cole Custer, Chris Bell, A.J. Almendinger, and Kevin Harvick. There were no wrecks of any consequence but there was a lot of bumping people out of the way to make a pass. Heat race winners were Kyle Busch, Tyler Reddick, Logano, and Justin Haley.  Denny Hamlin won the first last chance race and Ty Dillon won the second but was disqualified due to jumping a start giving that win to Ryan Preece. Kyle Busch was the fastest qualifier.

Next up? The Daytona 500 week starting Thursday February 17thwith the twin 150’s for starting spots in the 500. Friday should see the Camping World Truck races with Saturday set aside for the Xfinity cars that will be more like last year than anything else. The 500 on Sunday the 20thwill see the new X-Gen car in action on a 2.5 mile “D” shaped oval where the series championship point battle begins. The driver who wins the Daytona 500will be locked into the playoffs and it all starts over for another 36 race season for NASCAR fans and participants.

Do not forget all you drag racing fans to go to Pomona, California and see the Winter Nationals for the straight liners at the Los Angeles Fairplex, February 17 - 20th. [Same weekend as the Daytona 500] There have been a number of changes heading into the twenty-two-race NHRA season whose second stop is in Arizona.

It must be nice to live in the L.A. market. The NFL playoffs were two weeks ago, the NASCAR Clash last weekend, the Super Bowl this weekend and the NHRA season kick off the weekend after that.  Add five [5] Monster Energy Super Cross stadium events leading up to this weekend, all in Southern California, and you have the winter sports capital of the world, maybe. Seems like it. Enjoy. There will be lots of sports in 2022.