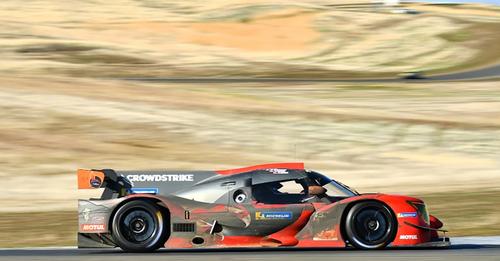 With the fastest car heading into the 25 Hours of Thunderhill presented by Hawk Performance, Crowdstrike by Riley team owner Bill Riley was confident in his team and in the equipment, but he knew a lot could change during the course of the race.

The team fought through light rain and a four-hour fog delay to dominate the 19th running of the 25 Hours of Thunderhill on Sunday. The team, which was the runner-up in 2021, ended the race with a 86-lap lead over second-place finisher MooreWood Creative White, one of the bigger gaps between first and second place in the history of the event.

“It's Thunderhill, you know, rain, cold mud, and the CrowdStrike by Riley team just did a fantastic job. Fantastic driver lineup with Colin and Felipe and Matt, and it's 10 years in the making,” said driver George Kurtz. “It's been a lot of P2’s and finally, we get the overall victory. So, we’re really happy. We had a little bit on the sound that we had to work on, and some heat issues, and we had a panel go bad, but the team did a fantastic job. The car was just about flawless for 25 hours almost.”

After a fog delay from 5:15 a.m. to 9:30 a.m., the race went green only to get red flagged again around noon while safety workers rounded up a car stranded in Turn 1. By that time, Crowdstrike by Riley already had the race lead well in hand, and went on to take the win.

After finishing second the last two years, Dig Motorsports broke through and won the E0 class at 25 Hours of Thunderhilll.

“I’ve had multiple people come up and say that’s probably the best E0 race they’ve seen at 25 Hours of Thunderhill in 10 years,” said team owner Jeremy Cuthbertson, who was quick to recognize Tazio Ottis Racing for being great competition and great sportsmen. “We just went for the win, but it came close at the end. We were chewing our nails because it came down to fuel between the Honda and us.”