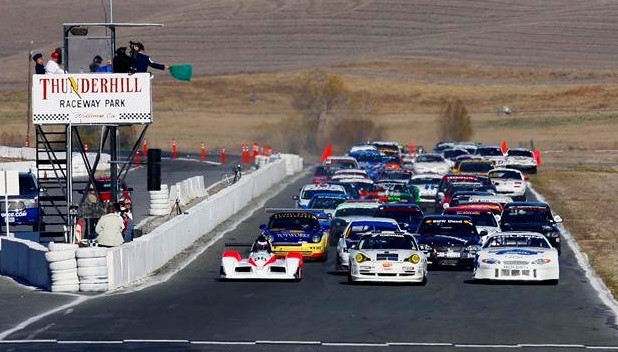 The National Auto Racing Association, [NASA] returns to Thunderhill Park in Willows this weekend for the eighteenth running of the 25-Hours of Thunderhill. A full field of racers will take the green flag on Saturday morning at 11am and race, non-stop, until noon on Sunday -- that is 25 hours non-stop.

Last year’s winning team overall was the Radical of “Team One Motorsports owned by Doug Shafer. The team will return again this weekend to defend their title. “We do this race every year because it is the toughest endurance race of its kind,” noted driver Shafer. “It is pure torture and will be even harder this year if it rains,” he said.

The winning team generally completes close to 650 laps on the three-mile, fifteen-turn course in the 25-hourwindow. This approximates close to 2,000 miles. When you consider that the greatest spectacle in racing, the Indy 500, is only 500 miles, the race in Willows this weekend is four times as long and far more difficult.

Gates will open on Saturday at 8am when spectators can get in for a mere $20 per car with up to four people. That price includes parking and access to all food and drink services as well as the pit area where the teams of drivers will stand ready to jump into the car for a three- or four-hour on-track session.

The track is not lighted during the dark hours which is how endurance auto racing used to be. Drivers must rely on their headlights and mirrors to avoid serious crashes in the dark of night. With rain in the forecast drivers will also have to install rain tires in order to stay on the wet track.

Local fans are encouraged to come out and witness the start of the only international auto race to take place in Glenn County each year. Come before 11 am and view all the cars and teams in grid formation on the track. Fans will also see drifting on the skid pads as well as the overall facility located at 5250 Hwy 162 just seven miles west of the I-5 on 162. Tickets are only sold at the gate Saturday and Sunday.

The light show that is part of the 25 Hour endurance race is in concert with the Christmas light show going on earlier that evening in the town of Willows.